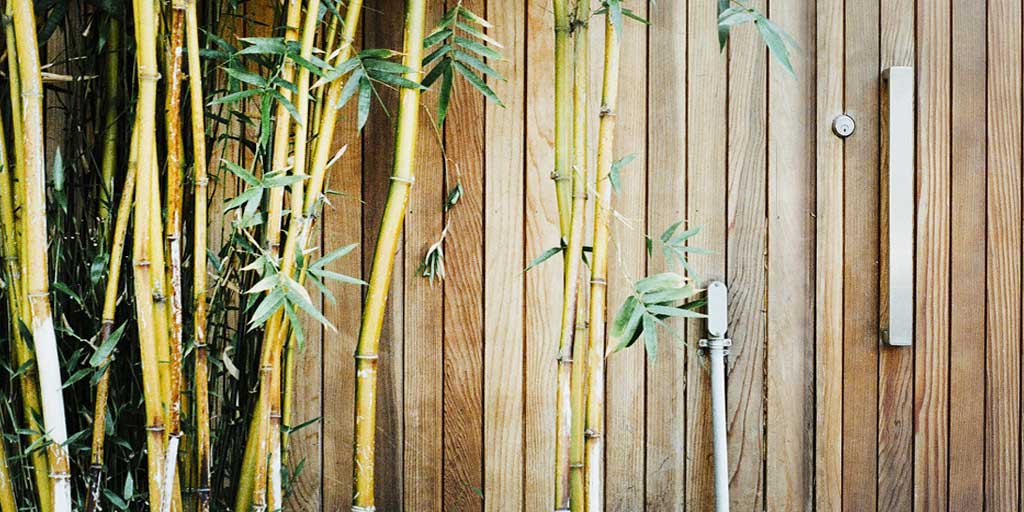 Native to tropical forests, bamboo is a type of grass that has a thick, woody stem, with stalks that can vary from a few millimeters around to nearly four inches in diameter. It can also be a very hardy plant, in some cases surviving freezing temperatures. Even though the stalks are hollow, the tensile strength of mature bamboo can be as strong as steel.
com
Bamboo is world-famous for being the fastest known growing plant. Most species can grow several feet in a month, with some kinds growing as much as three feet per day! Additionally, bamboo can spread outward as well as upward — runner bamboo can spread nearly 15 horizontal feet per season.

This plant spreads by sending out new shoots, rather than by spreading seeds. The root system grows outwards from the base, occasionally sprouting new stalks. This makes it very difficult to eradicate unless the entire root system can be completely removed, and since a single growth can extend for acres, this might be a difficult task.

How to Prevent Invasive Bamboo Growth

If you’ve lost control of the invasive bamboo in your yard, have a neighbor whose bamboo patch is spreading, or even live next to a forested area, then you know how tough it can be to deal with. Bamboo is an invasive species in many areas, and even when it’s native to a location, it’s still hard to keep it out of your yard. Fortunately, there are a few steps you can take to prevent this weed from growing in your yard.

Prevention, of course, is the best treatment. If you notice bamboo encroaching in your yard or want to control a plant of your own, start by putting up a barrier. It should be made of concrete or metal for maximum effectiveness; wood often works for a few years but will eventually decompose in the soil. The barrier should extend at least two feet below the ground and six inches above it. Be vigilant and cut back any shoots that try to sneak over it.

If it’s too late and you already have a invasive bamboo infestation, then not all is lost. There are steps that you can take to eliminate it — although these steps may not be the obvious ones.

So what does work? If your invasive bamboo has grown particularly tall, then your first step should be to cut it back to a manageable height. This can be done with a machete (for large shoots) or pruning shears (for smaller ones). If you have extremely small or tender bamboo, then you might be able to use your lawn mower to trim it. Cut as close to the ground as possible to make the next few steps easier.

There are three basic steps you should take to eliminate invasive bamboo from your yard. You should:

If you dislike using chemicals like herbicide in your yard, one organic solution is to pour boiling water over the plant. The extreme heat will kill the bamboo without harming your soil. However, this many not be as effective for larger infestations.

What doesn’t work when you’re trying to remove invasive bamboo? Simply cutting it back is rarely effective, because this doesn’t deal with the root system. The plant will just send up new shoots in a matter of days or weeks. Using some substances such as rock salt or bleach might help, but they can also damage your soil and make it difficult to grow anything after the bamboo is removed. Trying to burn the bamboo can actually make the problem worse, since it not only leaves the root system intact but enriches the soil with extra nutrients. And purchasing a panda to eat the bamboo isn’t really a feasible option.

What you should do if nothing else is working

If none of these solutions are working, then there is one more drastic option that you can take. You may need to not only eliminate the bamboo plant, but also the topsoil in your yard. This step combined with concrete barriers can eliminate bamboo once and for all. However, since it’s an expensive and difficult process, you might be better off trying the other options mentioned here first.

Conclusion: Don’t Give Up!

A hardy bamboo plant can live for decades, so eliminating bamboo is not a one-time process. Two or three years of dedicated treatment may be necessary to make your yard completely bamboo free. Don’t give up hope, though, and keep fighting that plant — eventually you’ll be able to eliminate it and enjoy a bamboo free yard.